The Cloister by Sam Lane

“The Cloister” is a piece that caught our eye, gave us some chills, and made us want to know more. When we got in touch with director Sam Lane, we knew there had to be a good story behind the Sculpey-faced characters and their entertaining, sometimes frightening tale, so we asked her to elaborate on the film’s title sequence that lets you know it was “loosely based on true events.” We never expected what she told us next.

“’The Cloister’ is based on the true story of Katy Perry trying to buy a convent from a group of nuns in LA,” she said. What?! “I was in love with the concept of having a nun and a pop star in the same room,” she went on, “and wanted to explore the comedy of that dynamic.”

Before we could even get to the making-of details we had to know more. Why on earth would Katy Perry try to buy a convent?

Lane’s response: “Haha, crazy right? It’s a gorgeous property in Los Feliz, sweeping views and Mediterranean style. She wanted it to have it as her private mansion, and literally showed the nuns her Jesus tattoo in order to prove she would be a holy tenant.

“The real-life story ends somewhat tragically…one of the main nuns in opposition to Perry actually died. The rest of the nuns were shuffled off to a different location, and the church took Perry’s money. I think she owns it now, but doesn’t live there.” The nuns made a documentary about it, which is certainly worth a viewing.

As for the production itself, Lane told us, “The process of creating ‘The Cloister’ was unlike anything I had experienced before.” I got a grant to make the film, and so I was able to hire a team of creatives, including animators from LAIKA. We shot with Dragonframe, sometimes in conjunction with a Motion Control rig run on Windows 98 (apparently it had been used for Star Trek at one point.) I got to take on more of a directing role, and it was quite a learning curve, having only previously made films by myself. It was crazy but awesome.”

Both Gigi de la Creme and Mother Agatha have ball and socket armatures, and are made up of various foams and adhesives. All the characters have Sculpey faces and mouths, and the clothing is felt.

For Lane, the biggest challenge making the piece was trying to cram all the shoots into a window of only a few weeks. “There were times where I’d literally be building the set we needed for the following day, so it was a very high-energy timeline to say the least. There were a few 15 hour days in the studio, but the animator at the time–Kim Blanchette, had an incredible attitude about it all that really pulled us through.”

Since “The Cloister,” Lane has been working on a pitch for a 2D animated series. In the meantime, she’s pursuing a career in storyboarding.

For more behind-the-scenes, check out the gallery of images below: 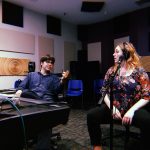 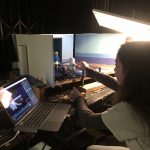 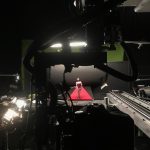 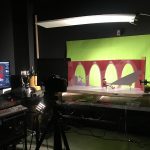