There is something that gets in the way of watching Ollie Magee’s short “Nod. Wink. Horse.” and that’s sort of the point. Wrestling with a favorite character that eventually gets in the way of the story is not a new concept to storytellers. But Magee’s way of solving this challenge has certainly proved to be unique to his own relationships to storytelling itself.

“This was one of those films that really evolved throughout production,” Magee told us. “What began as quite a linear, quite conventional narrative around these odd characters, gradually deteriorated into this meta, horse-obscured anti narrative. In the end it was about reflecting on my own emotional response to making the film. Indulging in my own self-doubt and using those self-destructive habits as creative tools.”

When Magee says “horse-obscured,” he means just that. There is actually a horse, the character his creator just could not bring himself to cut, standing in the frame obscuring most of the scenes behind it to one degree or another—quite literally getting in the way. It is what the director refers to as: “A film behind a horse. Obscuring the narrative. My act of self-destruction.”

“As this idea of obscuring the film came into play,” he told us, “it was important that the film had real depth and was made of tactile objects.” Without that technical aspect, the effect on the narrative would not have worked nearly as well. It was important to him to, “introduce this horse in front of the film in way that you know there’s something back there that you’re missing out on.”

Achieving this look took a lot experimentation, but in the end Magee settled on a paper cut out style that he felt worked well with his more 2D animation background. “Also being a painter,” he said, “I could keep my own grungy aesthetic with these little painted puppets.”

Part of Magee’s creative process is to use new techniques for every major project in order to keep things fresh. “Stop motion was a totally new approach for me, which got me excited about making it! There are also some painted elements on cel, such as soap bubbles and smoke. They added a whole new level of complexity to some shots. The whole film was shot on a large multi plane, about 10 layers deep.”

As you’d expect from a filmmaker so comfortable with exploring his perceived inadequacies, what we see in the final piece is the result of more than one purposeful detours. “Something that got me thinking,” he told us, “was how would this horse actually be shown on screen? At first I thought the horse belonged in his own world, separate to the film behind. I played with the idea of it being a shadow puppet, as if he were sat in front of a cinema projection, or even some fourth wall breaking live action puppet.

“But after lots of experimentation, I decided the horse belonged inside the film world. It was weirder, and somehow more unsettling that the horse lived in this world. Totally the mood I was going for! The horse was painted on cel, but because of the multiplane setup, he was casting unavoidable shadows on the rest of the scene. So, I decided to shoot the horse animation on a green screen and add him to the film at the very end, covering up a whole lot of animation in the process.”

Another big technical issue he had was integrating the puppet stop motion movement with the 2D painted elements like the smoke, blood and bubbles. “Some, like the bubbles. I could first animate the bubbles in place, having timed out the scene, and then replace each cel for each frame and match the location to the plate as that was being animated below.

“The cigarette smoke was a different challenge entirely. I couldn’t use the same approach because of the way smoke behaves. Moving the source of smoke does not affect the rest of the plume, so no more moving the cel sheets around. But after a lot of trial and error, I found a solution. Shooting the scene without smoke, then creating a 1:1 motion guide of the cigarette movement from screen to paper. I could then paint the smoke on cels using this guide, shoot the smoke on a green screen and composite the scene later.”

As Magee gathers steam for his next project, he continues to play with “ideas around narrative structure, and that relationship between film maker and audience that I find fascinating.” For more info on his current foray into that realm, check out the behind the scenes pics below: 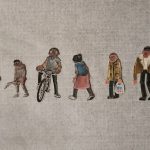 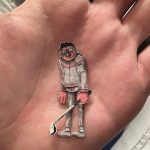 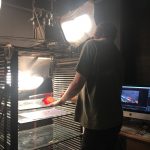 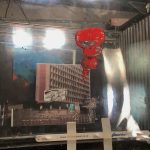 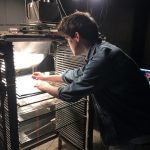 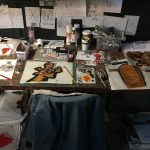