We caught up with director Adam Taylor recently to talk about his music video for Logan Lynn + Rian Lewis’s new song, “Underground.” According to Taylor, the tune is about the pitfalls one can encounter when following fortune and fame. The story is inspired by personal events and an important friend who helped him out of those trials.

“To launch Logan Lynn’s new album, My Movie Star,” he told us, “I felt the perfect backdrop would be the Golden Age of Hollywood with art nouveau inspired designs. Like usual, the concept proved more ambitious than it initially seemed and with just 6 weeks from start to finish, this was an exhilarating project.”

The piece features a stop motion puppet moving through a series of emotional lows, which he then climbs his way out of (literally at one point). Each of these moments is linked together by a scene of him falling down a kind of graphic spiral (think:f Hitchcock’s “Vertigo.”) This falling scene is always timed with the melancholy chorus that sings about falling down.

“When I finished with one set,” Taylor said, “it was immediately torn down to assemble the next one. Working fast like this is always very creative and honestly, the excitement is a bit addicting.

One thing that I learned is that rear projection takes a lot of space. Some of the sets were up to 12 feet wide and 26 feet deep including projection space and the screen,” something anyone but animators might take for granted.

“Having Dragonframe made this project possible,” he wrapped up. “It simplified the process and allowed me to run two units at once without worry (one for the projector and another for animating). It was great to get the majority of the film’s effects in camera and was well worth the extra effort.”

For stills and behind the scenes, see below: 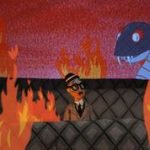 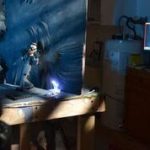 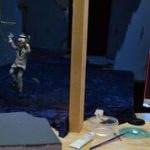 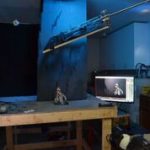