Shot on iPhone7: Proving with authority just how much you can do with an iPhone these days, the Hot Wheels City series on YouTube screams ahead with 4 episodes and close to 12 million people tuning in to see those little toy cars race, jump, flip, and skid to a stop in perfect form. Explaining that they felt the need to capture the attention of young viewers within the first ten seconds, animator Matt Manning told us, “Each episode is full of fast car action, sweeping camera moves, and a variety of creatures. The episodes start with a crazy fast car chase or the release of monsters by the villain of the series.”

The Hot Wheels City series was shot at the Ancient Order of the Wooden Skull Studios in Glendale, Ca. A one-stop-shop, everything was done there in house: voice recording, 3D printing, laser cutting, pre and post production, with a full wood shop and room for their 5 stages. “We used to scales during the production, 1/64 scale, which is the size of the Hot Wheels cars, and 1/24 scale for the interior car shots,” Manning said. “Almost every shot in the series had some type of camera move ranging from small hand cranked pans to sweeping motion control crane moves from floor to ceiling. We had one track that was 16 feet long that was used for tracking long race and chase scenes.

“To shoot the interior car shots we used a monitor mounted behind the car and characters for a rear screen projector effect. To do this we shot a pass (usually a moving shot) that was then used as the background for the shot. The images were advanced frame by frame as the animator moved the character and the car in the foreground. The effect worked great.”

Working with characters so tiny, however, was not without its challenges. This is where the iPhone saved the day, according to Manning. “Using props and characters that are roughly an inch tall, it is difficult to get a traditional DSLR camera at an angle tight enough to get the shots needed. Using a cell phone with the Dragonframe Tether connection enabled us to have an inch or two away from the puppets and in tight areas a larger camera would not fit…With the cameras so close to objects, sometimes the depth of field was razor thin. On some shots the director Ross Shuman said, ‘Focus is all we got…’”

Check out the behind the scenes photos to find out more about the series’ process: 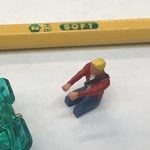 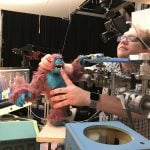 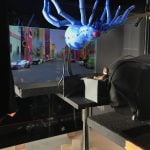 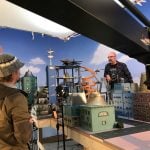 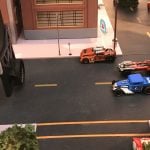