Aardman Animations’ Early Man, the latest feature from director Nick Park (of Wallace and Gromit and Chicken Run fame), is out in theaters this Friday, and looking to be another hit. Set in the prehistoric era, Early Man is the tale of a heroic caveman named Dug, voiced by Eddie Redmayne, and his best friend, Hognob (Nick Park), a Stone Age pet hog. Together, these two unite their tribe against Lord Nooth (Tom Hiddleston), a mighty villain who descends with his descending Bronze Age City to take over their Stone Age home.

The film’s dawn-of-time setting allows for some terrific prehistoric creatures and characters, and all of the raucous pageantry possible with the caveman era. A football (soccer) rivalry between the Stone and Bronze Age makes for an especially fun spectacle. In interviews, Park has called the film an underdog prehistoric sports movie, saying, “I didn’t want to do yet another caveman adventure because, somehow, it wouldn’t seem like Aardman to do that. We had to find a slightly different angle. It was when I was doodling a caveman holding, typically, a club, that I started to think about the idea of sport.”

Early Man marks Nick Park’s first feature film since Academy Award™ winning Wallace And Gromit: The Curse Of The Were-Rabbit. Park, who grew up in England, has been quoted as saying, “Plasticine was available when I was a teenager and started doing animation. I wanted to be like Disney, trying to film with plastic cells, but it was all too expensive…But Plasticine was around, user-friendly and available to the masses. It was great because all you needed was camera, an Anglepoise lamp and a table. And you would make whatever you like come out of a blob of Plasticine.”

When asked about Aardman’s recent moves into CGI and away from stop motion, Park made it clear that while he appreciates company founders Peter Lord and Dave Sproxton’s fondness for keeping abreast of the latest technology, “I think we also recognize that stop-frame is what we’re known for. Personally, I’ve always loved clay…We’ve always had that sort of handmade feel, and the challenge of producing a feature film is sustaining that feeling.

“I was insistent that we retain the fingerprints and the sense that it all feels ‘made,’ to have that creative imprint, even if it’s done on a large scale. We have to industrialize the process yet at the same time retain that handmade feel. That said, while most of the principal animation in Early Man is stop-frame, when we get into the bigger scenes, we do adopt contemporary technology to depict lava, smoke, large crowds and so on.”

Check out some behind-the-scenes pics of the process below: 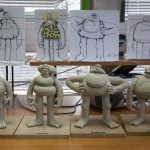 Some early design sculpts of the Early Man Characters 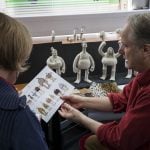 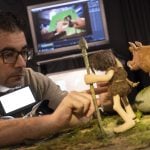 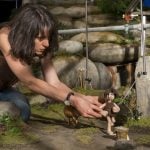 Animator, Claire Rolls with Dug and Hognob on set. The rig being used will be removed in post. 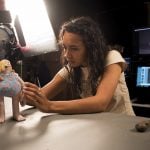 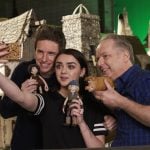 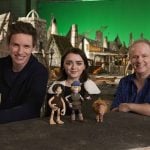