Dolly Said No to Elvis by Heather Colbert

Sometimes tales get so big that even the stories about the story become art themselves. This is what has happened with Heather Colbert’s music video for “Dolly Said No to Elvis.” The song, by Mark Nevin, tells the iconic true story of how Dolly Parton refused to part with her song ‘I will always love you’ when Colonel Tom Parker wanted to take 50% of the royalties if Elvis recorded it.

Colbert uses puppets made mostly from wire skeletons, foam and wadding, and sculpey clay to tell the story. The movements of the puppets set against watercolor backdrops in fiery sunset tones, plus high contrast lighting, make for dramatic visuals worthy of the epic tale.

Colbert spoke to us about her process, explaining that one of her biggest issues was time–trying to make the entire piece in two months. But she didn’t let that daunt her. Colbert set up a makeshift studio in her grandma’s dining room and got to work!

“I wanted to experiment with the techniques I had learnt at a 4 day intensive stop-motion workshop run by Péter Vácz and Joseph Wallace. Trying to create the effects in front of the camera, as much as possible, using felt roving and real moss very close to the camera to create different transitions between the shots,” she told us.

The drama of the set and lighting made sense when she explained that, “I also tried out shooting double exposures for the first time, to create the lighting needed for the looming shadow of Dolly. The time frame didn’t allow for expressions in faces so I tried to create emotion and expression through their body language.”

When we asked about challenges on set, Colbert said, “Mental-health wise, working so intensely on your own for long periods was quite tough but the main practical challenge was dealing with the puppets breaking with such a tight shooting schedule. They were wire armatures, so because dolly had a lot to do, her arms and hands broke very often I had to repair her with wire splints and cover her in tissue paper again, put her by the fire overnight and hope that she would be try by the morning!”

Check out some behind-the-scenes pics below: 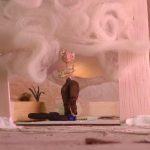 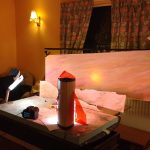 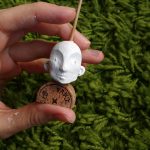 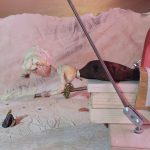 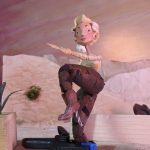 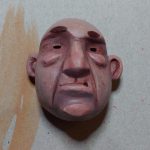