This week we take a look at a stop motion logo that director Norman Yeend was asked to re-create for the production company of writer/director James Wan (The Saw, Furious 7, Aquaman). The animation now shows before his horror film, The Nun, and will also be shown before his upcoming film La Llorona, and with the series Swamp Thing, both of which premiere in April.

The Atomic Monster logo was based on Wan’s existing company logo, which was originally done in black and white using CGI. It showed a city being menaced by gigantic tentacles that were defeated by a rocket-man who zooms in and blasts them before landing and forming the words ‘Atomic Monster’ with his laser ray.

We spoke with Yeend about the inception of the project: “Funnily enough, I already happened to have the same number of animatable tentacles I made and animated for a commercial many years prior. Being made of silicone rubber, they were still in good condition. They were about 2 feet long, and perfect for the job. Another fun fact is that when I was 14, I made a stop-motion film on Super 8 called Atomic Monsters. As James said when I mentioned both coincidences to him, it must have been kismet.”

Once this had been decided Yeend got to work fairly quickly. “While the previs was being worked on, a model-maker friend named Warren Barnard was super busy making the laser cut miniature city. Meanwhile, I worked on the rocket-man puppet and liaised with James and his business partner. The construction of the rocket-man puppet proved to be more difficult than I had first imagined.

It was the zooming Rocket Man that proved to give the team the most trouble. “One of the biggest challenges I personally faced was the construction of the rocket-man puppet,” Yeend Said. “This was due to his design which I had to adhere to. Because his design called for his arms to protrude from large balls on his shoulders, I couldn’t use a regular ball and socket jointed armature, as that would have necessitated a hole or slot which would have become visible whenever he raised or lowered his arms, etc. In the end I came up with a solution of using magnets which worked quite well.”

With this one in the bag, Yeend is currently working in the same vein re-doing opening credits for a late night horror show screening old horror movies called the Schlocky Horror Picture Show. For more on the making of the Atomic Monster logo, see these behind the scenes photos: 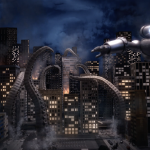 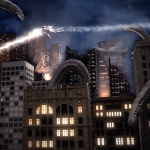 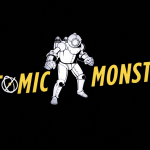 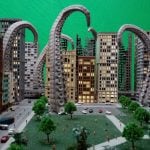 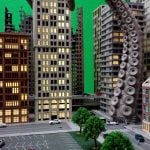 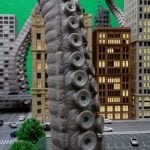 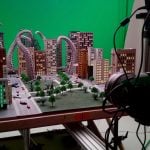 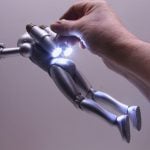 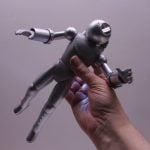 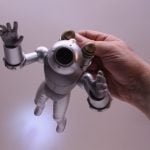 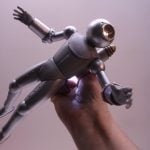