The Coin by Siqi Song

“The Coin is a film about tradition, family, immigration, and most importantly, about finding ourselves,” says Chinese director, Siqi Song. She goes on to explain the origins of the award-winning short that we found exceptional in both visual and narrative achievement.

“The story starts with a New Year tradition from Northern China, where I was born and raised. On New Year’s Eve, families would gather in the kitchen and make dumplings together. In a few of the dumplings, we would hide coins in. At the family dinner, whoever eats the dumplings with the coin in will have a blessed year ahead. The coin in here is simply a leap of faith, a little bit of optimism packaged inside a dumpling.”

This early part of the film really stands out technically for its ability to create such an alluring look and feel. From the oh-so tactile felted wool to the contrasty and warm lighting, food emerges on screen that is so clearly not food but textured fiber. Yet these ingredients and the dumplings they’re used to create look, in some sublime way, almost delicious in spite of the the fact that they are so clearly wool and not food–or maybe because of it.

“But as I grew up and immigrated to different cities and countries,” Song continued, “I find I have to constantly change myself to fit in the new environment. Anyone who has the experience of moving from one place to another would have experienced some sort of identity crisis, the feeling of being lost and misplaced. But at the end of the day, I find our past is an essential part of who we are and that’s what makes us special. Finding faith within ourselves is more important than looking for validation from others.”

This part of the story through the resolution is impressive in its own way. Yes, the visuals are just as stunning (back lit red felted wool makes for a stunning womb, for example). But this section also stands out from a narrative perspective. It is full of visual metaphor and just enough exposition in the form of voiceover or flashback, that the viewer is left with a sense that they figured out something of importance here and not at all too easily.

We asked Song about the production and she filled us in on how it went: “The big challenge of this film is to figure out the size of the characters and props. There are many scenes in the film the protagonist is fantasizing the world is made out of giant food. In order to accomplish the shots, we had to build two sets of props for every scene based on the scale of the actual puppets.”

With each prop so carefully constructed of felted wool and fabric plus some of other usual suspects for motion model making, like clay, wood, plastic, and foam, this can’t have been a quick process. But the result is certainly one the crew can be proud of.

Up next for Song was a recently directed an animated series titled “All In A Day’s Work,” which is a collaboration with It’s Nice That and Mailchimp Presents. The comedy series is about the ups, downs, and sometimes-painful truths of life as an entrepreneur or small business owner.

For more background on The Coin, see the behind the scenes images and video below: 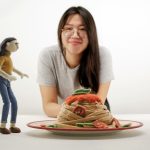 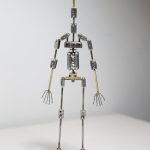 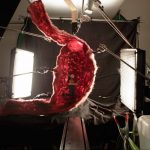 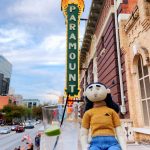 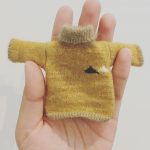 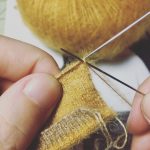 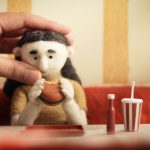