This week we feature a piece by Maxwell Sorensen, which was part of three animated commercial spots for Target. “This is my favorite one of the three,” Sorensen told us of the spot where school supplies come to life and dance their way on into a backpack. “I was brought on by Lacey, the director, after the concept, storyboards, and animatic were already completed by Lacey and her team. Once I was confirmed for the project as animator and rigger, I did a zoom session with Lacey where we played with some school supplies to get some ideas on how these things could come to life.”

After that, Sorensen was able to shoot some quick animation tests at home on his desk. “I really like doing tests whenever possible. It’s rare I get to do them on commercials, but it really helps to figure out how things can move and how to rig them. I always shoot tests fast and rough without proper lighting. It’s all about figuring out what works and what doesn’t work. These tests were all about making the pencils walk and the pace of the walk. A happy skipping motion was the favorite one.”

After testing, he spent half a day in his studio making some mounts to hold various little objects with ball and socket rigging parts. “I have a nice sized rigging kit that travels to different jobs with me, but I usually have to make a few custom parts up to grab things. When using rigs it’s really important to have strong and well thought-out attach points. All the fancy rigging in the world won’t help if the prop or puppet falls off the rig the first time an animator touches it.” Wise words indeed.

All the props in the piece were actual product from Target, but the team had to modify a few things to get them to animate nicely, like adding wires inside of the stapler so it would hold a pose and gluing little wires to the back of paper clips to make the frog legs. “This was hastily done on the pre-light day (a set-up day before the shoot) by rigger/fabricator Peter Von Erickson,” Sorensen said.

According to Sorensen, the biggest challenge on the shoot was timing all the action so it would fit within a 10 second spot, but still read. “It’s somewhat uncommon to animate on 1s in the commercial world, but I actually shot on a bunch of things on 1s just so I could squeeze it all in and keep the motion readable. Because it’s kind of a crowded scene, I had to shoot two passes to get everything on screen without rigs overlapping.”

The other challenge was that the team didn’t have access to all of the product until the pre-light day. “We just had to cross our fingers and hope what we planned would work and then throw it all together on the pre-light day,” which, as you can see here, it sure did.

The commercial played often in late summer 2020 and, “…then vanished into the ether,” Sorensen told us, “But it’s fun to look back at these projects. It lives now on Instagram and my website.”

To see some BTS shots from the production, see below: 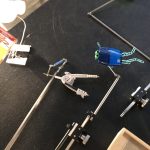 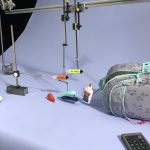