The Stop Motion Festival of Montréal was a big deal even before COVID. But now, getting to come back to the fest in person is even more exciting. Of course last year wasn’t cancelled altogether, as organizers encouraged people to “Reserve your favorite sofa cushion and get your popcorn ready.” But this year’s invite is a level up, inviting goers to “ Leave your superstitions at the door for Festival Stop Motion Montreal’s lucky 13th edition this September 10-19!”

We caught up with Gianluca Maruotti, director of the festival’s teaser, to hear more about the making of the trailer. “For the 13th edition of the Stop Motion Festival of Montréal we wanted to create a teaser that would highlight the number 13, which is believed to bring bad luck in some countries and good luck in others. So we aimed to play with the concept of superstition associated with the number. The festival co-director, Dominique Coté, was looking for something a little spooky but funny at the same time, so I came up with this simple sketch.”

The piece is a clay and character-filled jaunt, with the number 12 melting into 13, while the music slows spookier and a black cat replaces a cute little dog. “Tout va bien aller,” reads the tag at the end: “What could possibly go wrong…”

“The main theme is the passage from the twelfth to the thirteenth edition of the festival,” says Maruotti. This brings about a bizarre, unexpected consequence: the transformation of a small, cute dog (but not that cute), into a black cat, bringer of bad luck! Supporting this main event we have a cheerful and unlikely assortment of odd creatures, reminiscent of the vibe at a carnival or country fair.

“The puppets were made entirely out of plasticine. The colour palette I went for was quite limited and desaturated. I wanted the background to appear as bland and aseptic as possible chromatically, and stylized to create contrast with the characters. The best way to do this was to use paper cut-out for the forest, which is the main setting. Choosing paper for the backdrop was a great advantage in terms of time management, as the puppets themselves take a relatively long time to create and animate, even though the animation is pretty minimal.

“Paper and plasticine are not necessarily complementary elements in an animation, not only in terms of texture but also because of their vastly different nature (three-dimensional for plasticine and two-dimensional for paper). But I think the pairing of the two elements works really well for this particular project. The paper lends itself to create a stylized, fable-like, and somewhat also bizarre backdrop to the mixed bag of characters, who in turn stand out even more in contrast thanks to the malleable fluidity of the medium.

“I didn’t have much time for this project and I expected to struggle in order to reach the target, but keeping everything simple and focusing on the dog/cat transformation, I overall had great fun working on it.”

For more on the making o this teaser, check out the bts pictures below: 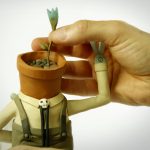 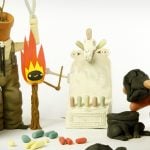 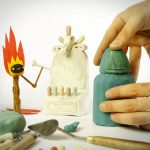 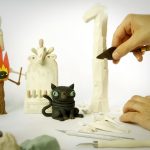