Silver Moon (For Neal) from Angie Pickman on Vimeo.

Silver Moon (For Neal) is a music video with strong visual appeal and a terrific song to match. What immediately stands out when you first lay eyes on this easy-going piece with Native American vibes, is the expert aesthetic of the paper cut-outs and catchy, fluidity of the song. But there’s a deeper reason that the video grabs you so powerfully.

“Silver Moon (For Neal) is a song written by Kenny Roby for our mutual friend, musician Neal Casal (Ryan Adams and the Cardinals, Chris Robinson Brotherhood, Circles Around The Sun), who took his own life in August, 2019,” explains director Angie Pickman. According to Kenny, she told us, he wrote this song after his experience the night of the tribute show for Neal when friends and fans gathered together to bid their farewell: “I came around from the front of the theatre to see Dave Schools, who was taking over the producer role of my new record in the wake of Neal’s death, staring up at the sky, excitedly asking me, ‘Did you see the moon?!’ I had, and we both stood there in wonder at this giant silver crescent that seemed to take over the late-night sky.”

Thus, the song was written and included on Kenny’s new album that Neal was to produce, and in February, 2020, Gary Waldman, Neal’s longtime friend and manager, contacted Pickman at Dave Schools’ suggestion to ask if she’d be interested in animating a video for this song: “I couldn’t imagine a better way to pay tribute to Neal. When I met Neal in 2007, I was struggling with where I was in life. I wanted to be an artist, but I wasn’t confident enough in my skills to really give it a go. He showed up in my world and gave me the spark I needed to light my own path, and I’ve been protecting that light ever since.

“That spark ultimately inspired this video for me,” she continued, “and is illustrated with the lantern in the storyline.” She and Kenny talked about a few loose ideas involving the forest and animals and the moon changing into a bird, and it all took off from there. “Coming up with the concept was almost effortless,” she told us, but she didn’t have to—that much seems clear when you watch the way the piece comes together seemingly without work.

In terms of materials choice, there was little decision-making involved as well. “I work almost exclusively with cut paper in my art practice, so there was no question what materials I would use. All the characters and scenery were cut out of paper, painted maps, and colored tissue paper with an X-acto knife and animated on a multi-plane animation table. Some of the scenes were animated all together using several planes on my animation table, and some had elements that were animated individually and color-keyed and layered together in post-production.”

When we asked about any bumps in the road, Pickman told us, “The biggest challenge I faced with this video was lighting from above. In the past, I animated my black silhouette characters on a single plane light box so that it is only lit from behind. For this video and my upcoming projects, I wanted to add more to that, and so I built a multi-plane animation table to get more dimension and to experiment with more color and paper varieties.

“I wanted backlighting to get the silhouette effect as well as background light, but also lighting from above to show the colors of the designs on the silhouettes as well as the scenery. I used a light box underneath the glass planes as well as gooseneck clip lamps above so that I could move them around and direct them where I needed them. Lighting evenly and effectively and eliminating light glare on the glass planes was certainly a challenge. Hot spots and uneven exposure were hurdles that I had to overcome and I didn’t always do that, as I’d find out in my editing program after I had already finished animating, so I’d have to correct them as best I could in post-production.

As we’ve heard from other animators, and as expected, she also reported that working at home during the pandemic was also a challenge. “I basically moved my entire public art studio into a small corner of my basement in early April and worked down there all summer during the mandatory quarantine. Working from home can be great but has its own challenges with kids, pets (as you can see from production photos below), and a host of other things that take your attention away from the creative task at hand. Also, the emotional toll of the pandemic and all the uncertainty surrounding it weighed heavy on me, not to mention the emotional weight of creating a work as a tribute to a friend who died tragically and unexpectedly just a little over a year ago.”

We hear you, Angie, boy do we ever. Happy to get to celebrate this impressive piece of work and Neal’s life with you.

For more on the pice, see the behind-the-scenes images below: 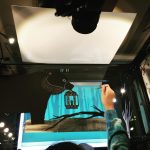 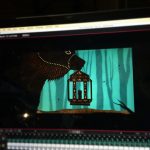 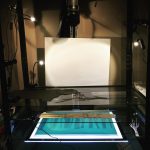 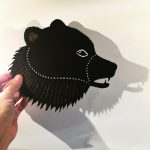 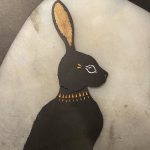 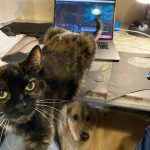 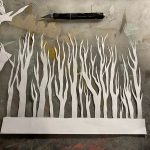 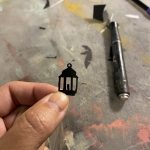 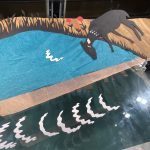 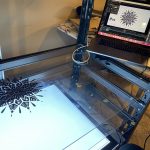 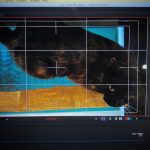