In their latest stop motion offering, Aardman’s Robin Robin is a departure in more ways than one: being both their first musical as well as their first film after leaving See BBC for Netflix. First impressions do not look like the film went all Hollywood on us though. Set during Christmas, the tale of a bird raised by mice looks just as warm and real as the studios’ past hits.

We recently caught up with director, Mikey Please, who gave us the lowdown on the story’s origins: “We had the basic idea for Robin Robin about 8 years ago, one late evening in our studio, the story of a robin raised by a family of burglar mice, who then goes on an adventure to steal a Christmas star with a materialistic magpie came into being. We then worked on telling the story to our friends and family every Christmas for a few years until we felt the narrative was clear enough to wrangle it into a pitch.”

With an inviting warm tone against cold snow look, the piece features needle felted characters with the wide-eyed look we’ve come to associate with Aardman classics like Chicken Run and Shaun the Sheep. “We’ve been huge fans of needle felt animation,” Please said, “particularly the work of Emma De Swaef & Marc James Roels, and have experimented with the process on small scales over the years. But it wasn’t until we finally came to pitch the project to Aardman and happened to bring some needle felt Christmas decorations, small mice and birds that would hang on a tree, that the idea that we’d use needle felt as a central material for the characters in the film stuck.”

Not everything in the world is felt, however. “We used carved materials for all of the trees, and lots of textiles for leaves and lots of our trusted Plasterzote (the material used in Marilyn Myller and the Eagleman Stag) for various other things.” The needle felt was used for the effects of the film though: the show, fire, smoke etc., which Please said, “we had a lot of fun animating on multi-plane and then comping into the set. But we faced a big challenge in integrating them.”

We’re pleased to hear that the software helped. “Dragonframe’s capacity to shoot multi-exposures was key in solving that problem, as we’d all those atmos heavy shots in stereoscopic to give us depth information, which then allowed us to integrate all those effects seamlessly. Some other shots (such as the fireworks scenes) had up to 60 plates to integrate, so that mulit-exposure function was really put to the test!”

Coming up, Please said, “We’d love to tell more stories in the world of Robin Robin, though it’s too early to say how and when that’ll be. We have various projects brewing away, our pilot Alan the Infinite took a back seat while making Robin Robin, so we hope to give him the limelight he deserves.”

For more behind the scenes check out the images below: 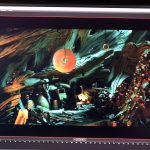 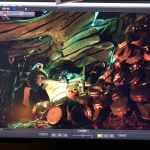 And here is a behind the scenes video from Wired: