Master of Science in Applied Computational Life Sciences by Walkingframes

This week, we feature an online promotional video put out by The University of Applied Sciences Zürich (ZHAW) about their new master’s degree in computational life sciences. The piece features several students who are using computer data to empower their particular fields of interest such as cooking, health coaching, and environmental science. Understanding the practical uses of machine learning can be some pretty heady stuff. That’s where stop motion comes in. The video adeptly uses animations to help viewers visualize what their program has to offer and understand how it can be used in the real world.

“Because most of the work they do happens on computers, they don’t have much visual material compared to other departments (chemistry, geology, food technology, etc.),” said director, Julian Amacker, of Walkingframes studio out of Zurich. “So we proposed to visualize the very digital research with analog animations.”

The film tells the story of three students, why they chose the program, what they want to learn and where they imagine themselves in the future. “The big challenge,” Amacker said, “was to figure out how to visualize data. So we ended up doing a lot of 3D modelling and 3D printing with (wood) filament to have complex patterns with the stop motion feel. Another challenge was the combination of pixilation and animated objects. The actors have to be very patient. But it’s also very interesting to see the what the actors create, because unlike puppets, they have a life on (sic) their own.”

For more on the making of this piece, check out the behind-the-scenes images below: 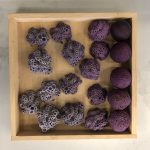 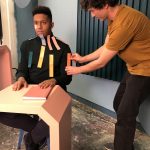 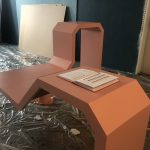 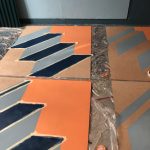