Press play on Lynn Tomlinson’s award-winning, Elephant’s Song, and you will instantly be sucked into the story. The historic tale that unfolds is beautifully painted and animated, making it even easier to watch. “There were several reasons I was drawn to tell the story of The Elephant’s Song,” Tomlinson told us. “When I first learned of Old Bet, on a podcast called The Memory Palace, I was drawn to the loneliness and pathos of this elephant’s story.”

Old Bet was the famous elephant of a Somers, New York farmer who bought her to farm the land and ultimately realized that was not going to happen and the real way to profit from his purchase was to simply charge people a nickel to come and see her. Old Bet ultimately became the first circus elephant in America. Set to a tune sung by her friend, an old farm dog, their story is portrayed in colorful, handcrafted animation, created frame by frame with clay-on-glass and oil pastel animation.

“It seemed like the right time to tell this story about the start of the American Circus with traveling menageries,” Tomlinson told us, “since “The Greatest Show on Earth” had recently closed down after retiring their elephants. I went to Somers, New York, to the Elephant Hotel, for my research. Working with my son, Sam Saper, who is a writer and musician, we came up with the dog as the story’s narrator. The dog would sing the verses and the elephant could sing the choruses.”

Next, Tomlinson used social media inspiration to fill in the picture of Bet’s life. “After the song was recorded, using it as the soundtrack, I edited together a video mashup “animatic” made up of YouTube video clips, still images, and paintings from the 1800’s, including artwork by Edward Hicks, and painters from the Hudson River School. These paintings helped me come up with the visual style.

“I brought in the video as line-up layers in Dragonframe. Then I used oil-based modeling clay on glass or plexiglass as a kind of thick finger paint. I put a solid layer of clay down as a background color, then added details with the colored clay. I used a clay tool to inscribe lines to add definition to the imagery. I then move the clay frame by frame in a stop-motion process. I usually animated at 12 frames per second, but sometimes 8 or 10. At times I crafted my imagery tightly to the video reference, and other times I let myself improvise, especially in the transformations from scene to scene. The transformations are my favorite part to animate.”

Tomlinson’s editing process sounds pretty demanding. Having recorded the song ahead of time, it was a lot of work to keep the animation to the right number of frames. “Working to the sound track in Dragonframe really helped keep me motivated and moving forward. But that also meant that the timing was pretty restricted. At times I had to fit a lot of specific action into a very limited number of frames.”

Too, she grappled with the importance of balancing the emotional elements of the film” “I needed to include moments of joy to balance the moments of sadness. Sam would consult with me regularly to see how it was hitting. And even after I was finished the film, I went back and touched up a scene where I had included some blood on the elephant’s leg, painting it out because it felt too heavy-handed.”

Another challenge she overcame was figuring out how to include, or at least allude to, all the related stories she learned about while researching Old Bet. “There is a famous painting that was completed almost at the same time and place that Old Bet’s story begins, Charles Wilson Peale’s Exhumation of the Mastodon. It hangs in the Maryland Center for History and Culture here in Baltimore. Mastodons disappeared from North America, in part due human hunting, and the fossilized mastodon that Peale dug up and displayed led people to understand that creatures that once roamed the earth could become extinct.

“This really resonated with me, to think that this lonely elephant, the only one of her species in North America, was walking on the bones of her extinct ancestors. And other histories struck a chord as well…The challenge was how to include all of this related and compelling information and imagery in the same film that tells a fairly linear narrative about Old Bet.

“I decided it was important to preserve a trace of the photographic image, so I made video collages, then printed out single frames of video and colored over them with oil pastel, then recaptured the images in Dragonframe. My mother, M.C. Tomlinson, and my daughter, Lucy Saper, both helped with the oil pastel. With my clay on glass process it is nearly impossible to have animation assistants, so that was a very nice benefit of including a second technique!”

Upcoming projects for Tomlinson include a music video for a song by Johnny Flynn and Robert Macfarlane called, “Ten Degrees of Strange.” Completed in early May, “It was a very rewarding experience to collaborate with them, especially after the isolation of the pandemic.” Also done in Dragonframe, we look forward to seeing what the team came up with!

For more on the process, check out these behind-the-scenes images here: 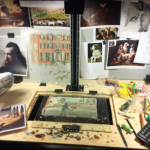