These days music genres are all over the place, with fans’ favorite playlists more varied than label execs in the previous century could have imagined. Now, for Amazon Music, Stevie Gee and Essy May have come up with an electric ad with just as much variation of animation styles. In Unboxing Amazon Music, the duo open up the immersive world the platform has to offer through an eclectic musical experience, showcasing the best genres from around the globe.

The story of the four individual music genres in the piece employed visual techniques that perfectly complement the vibe of each. Steve and Essy started with a brief asking them to surprise viewers by taking them on an exceptional journey through Amazon Music’s eclectic musical offering. They began with clay for the thumping sound of Denzel Curry, experimenting with multiple character designs, sketching various iterations until they came up with the explosive impact they were looking for.

“The model was sculpted in clay by our talented team of model makers,” they said, “then molded with internal armatures to manipulate his movement. Animating claymation is an intricate and delicate process; each frame is meticulously crafted.”

The pair used 3D via Unreal Engine to create the street structure for the colorful carnival scene, taking inspiration from various Latin American towns to lend authenticity. For the Christmas dinner scene, they blended 2D characters and 3D environments with complex camera movements with carefully designed puppets to orchestrate playful moments, allowing the personality of the Do$hington family (and the food puppets) shine through.

The food puppets were made of foam latex then airbrushed. The family puppets were designed like ventriloquist dolls, sculpted in clay, then moulded and cast in silicon before being airbrushed. The marionettes were dressed in children’s clothes and tailored to size by the team’s seamstress. Puppeteered by fellow directors Jonny & Will, the puppets were rod operated underneath the set.

In the electric and vibrant anime world, the characters were created in CG. Influenced by Japanese pop music promos, cover art and novels, the environments were also built by their CG team to round out the mixed media feat.

For more on the making of, see the images below. 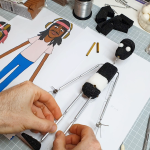 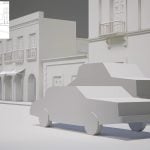 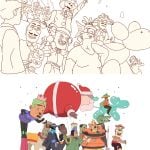 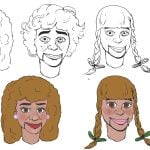 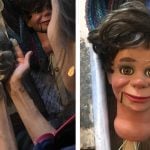 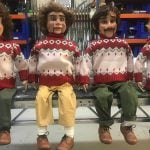 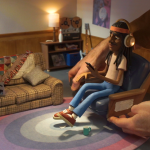 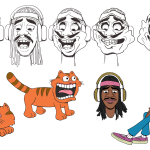